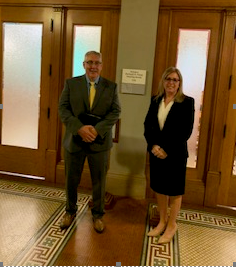 On June 3, 2020, Superintendent Dave Gibson and Treasurer Christy Laubach were invited to represent Felicity Franklin Local Schools and testify as proponents for Senate Bill 313 (written testimony).   This testimony was given to the Senate Finance Committee and was sponsored by Senator Terry Johnson.

Senate Bill 313 includes legislation to help schools that have had reductions to funding due to the devaluation of public utility companies in their districts.

This bill has two main parts:

Felicity Franklin does indeed meet both criteria of this new proposed legislation, but we are still waiting for clarification as to whether we are eligible if we are on the states guarantee funding program.  Being “on the guarantee” means that our enrollment has decreased to a minimum level and therefore our funding cannot go below this minimum guaranteed amount.

In addition to testimony from Felicity Schools, there were other district representatives testifying as well, some of which were asking for modifications to the bill.   Senator Johnson also gave testimony in support of the bill and specifically mentioned Felicity Franklin Local Schools (Senator Johnson’s Testimony).  The finance committee heard all testimony, which were all proponents of the bill, but no decision was made at this stage of the process.  SB 313 is currently in committee stage and has many steps to go before being adopted into legislation.  After testifying, we were notified that Senate Bill 313 has now been added to Senate Bill 319 which is being reviewed by the Senate Education Committee.  This is very promising, as Senate Bill 313/319 will now be simultaneously reviewed in the Senate Education Committee.

For some of you, this article may remind you of the School House Rocks music video titled, “I’m just a bill.”  If you are too young to remember this, click on the link below so you won’t miss out on this great educational opportunity. (School House Rocks:  I'm just  a bill).  I have also included a link to the Senate’s bill tracker page so that you can also follow these bills through the process, as they make their way into becoming a law (SB 313 Bill Tracker) & (SB 319 Bill Tracker).